Since the 1980s I have been striving to understand our Creator’s holy calendar and live in accordance with the times He hard-wired into Creation. Over the years I have seen a proliferation of calendar systems among those turning to Scripture, as my own understanding has also grown and deepened. Calendar disputes have led to division and strife since the time of the Dead Sea Scrolls. However, I believe that honoring our Creator’s calendar to the best of our ability, should not be something that divides us. God’s people are re-awakening all around the world to His truth, but not everyone is ready, willing, or able to the same degree, or at the same pace. God waited twenty-four years before revealing to Abraham the commandment of circumcision. Don’t be so quick to circumcise your neighbor or condemn him for not being where you are in your walk with God! Let God speak to him in his own time, when he is ready!

Many people call for “unity” but what they really mean is “uniformity”. They claim unity is important to them, but reject everyone who doesn’t agree with their understanding of Scripture. Unity can be achieved even when there is a lack of uniformity. This requires a certain degree of spiritual maturity and humility. It is only human that we get frustrated when others do not see things our way. But we must be humble before the Almighty and ask Him to lead us on our walk with Him. If those who walk alongside us in faith approach Yehovah with the same humility, then it is not for us to judge them. We should be united, not divided, by our love of our heavenly Father and desire to live by His Word.

I got some real insight into unity in 2011, when Keith Johnson and I were down in Egypt shortly after the brutal dictator Hosni Mubarak was overthrown. We had the opportunity to sit down with several Bedouin men in Nuweiba on the shore of the Red Sea, where the Israelites crossed over from slavery into freedom. I asked them what they thought of the overthrow of Mubarak. One young man was nostalgic about the fallen dictator insisting that as bad as he was, at least there was “unity” under his rule. This young Bedouin man had never known the basic freedoms many of us take for granted. He was terrified by the “division” that racked his country. I realized then that political tyranny creates unity at the cost of freedom, just as spiritual tyranny creates unity at the cost of truth and the individual’s relationship of faith with God.

I urge all those who observe our Creator’s times to treat their fellow believers in God’s holy word with love and respect and to embrace them despite their differences.

“What does Yehovah require of you? To do justice, and to love kindness, and to walk humbly with your God.” (Micah 6:8)

Sign up to receive email updates and to hear about our latest adventures!

We won't sell your email or send you spam. 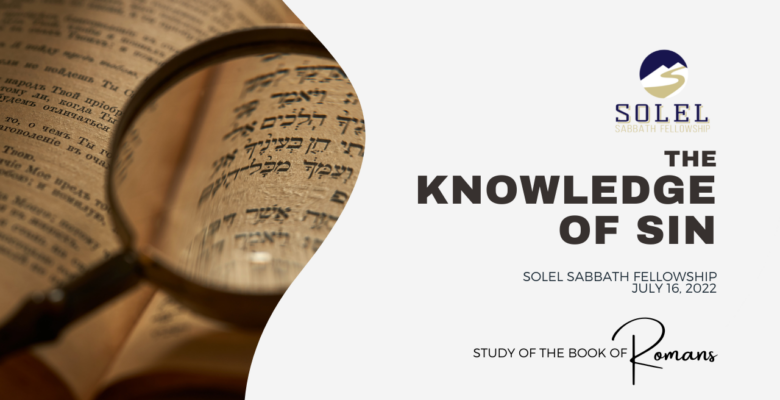 In this video from Shabbat, July 16, 2022, Kraig Elliott continues his study on the book of Romans. …